So we finally managed to schedule Beckett's 15 month well check...on the day he turned 16 months.  I guess we've been busy.  Did I mention that having two kiddos is exponentially more crazy (and amazing) than having one? ;) 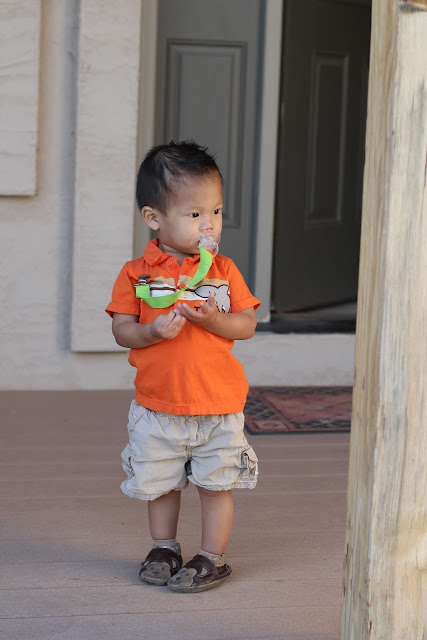 Beckett's appointment went well.  He didn't love the shots they gave him, but who can blame him?  He's pretty much right on target (or ahead) in all areas other than being a little behind on speech.  Learning Chinese for 9 months and then suddenly switching to English tends to do that.  We actually started speech therapy a couple weeks ago to give him what he needs to catch up.
Also, I think I shrink children. ;)  When Beckett came home, he was in the 50th percentile for weight.  At three months home, he was down to the 30th percentile.  And now, he is in the "less than" 3rd percentile.  In truth, our boy is a picky eater.  And he belongs on an Asian growth chart.  He loves to eat and is branching out with new foods all the time.  We're not worried.  He weighs in at 20 lbs.  We tried to get his length, but he didn't cooperate. What can I say, he gets a little anxious around everyone doctors. ;)
Beckett's personality has really been coming out lately and it's so fun!  He is very serious most of the time, but he can be a total goof-ball.  He loves making people laugh and he loves praise.  He's a brave boy; no fear.  He's still a Mama's boy, but he's becoming more and more of a Daddy's boy.  Dad's just way more exciting and Beckett loves exciting (unless the excitement involves sudden loud noises, those terrify him).
We are so thankful for our snugly, sweet, sometimes challenging, and definitely humbling, precious, smiley, and perfect Baby Beck! 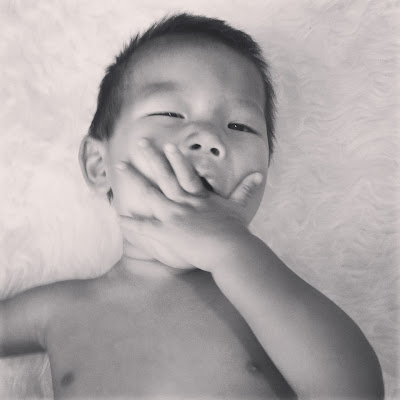 Last week, Caysen finished his first year of preschool!  It's hard to believe he is going to be four in just a few short months!!
To prepare for his second year of preschool, a handful of teachers, therapists, and myself got together to discuss progress and goals for the upcoming year.  Doesn't sound very emotional, right?  I didn't think so either, but it totally was!
First of all, we began the meeting by discussing Caysen's progress and how he did with the goals we set for him a year ago.  It was so amazing to hear the teachers and therapists talking about how he exceeded expectations time and again.  Every mother loves to hear people gush about her child (right?) and there was a whole lotta' gushing going on!
And second, I love. Love. LOVE Caysen's teachers and his aide! They absolutely adore Caysen and I have complete confidence that he feels loved and cared for during his time at school!  I could hardly contain my emotions as I explained to the team how thankful I was for Miss Debbie, Miss Lori, and especially Caysen's aide, Miss "Jay".  Some people cry when they send their babies off to preschool.  I didn't.  I did, however, cry the first day that Caysen marched into the classroom, full of excitement, squealing "Miss Jay" and running toward her as fast as his little legs would carry him!  Caysen loves big! And nothing warms my heart more than watching him love...except maybe watching people love him back. :)
So as we settle into life with IEPs and aides, and therapists, and a school medical plan, and extra doctors, and the list goes on, I find myself thankful; thankful that my first baby has a whole team of people who love him and are cheering him on with every new accomplishment, no matter how big or how small. 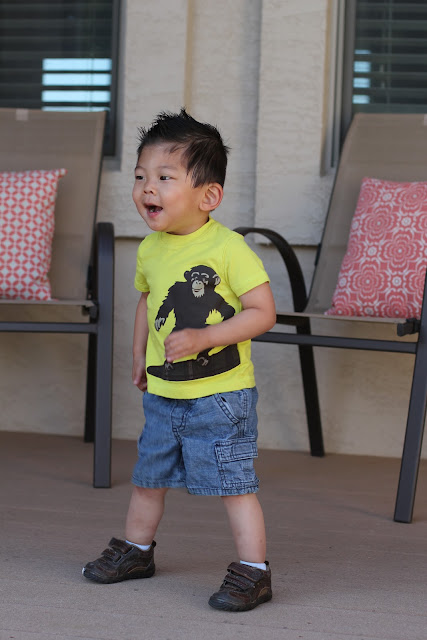 Posted by Leslie Kirk at 2:04 PM No comments:

I've been on a "blog break" for a while, but I think I'm ready to jump back in.  After all, if I don't write down all of the fun things going on with our boys, I'm sure the memories will disappear from my exhausted mommy brain for good. 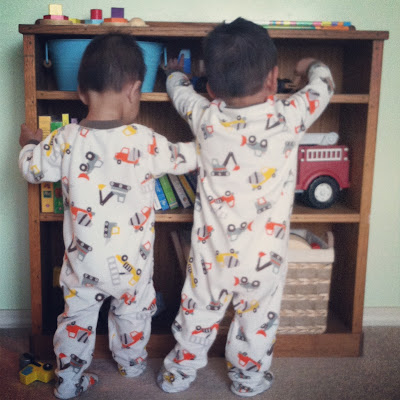 It's hard to believe we've been home with Beckett for almost seven months!  Having two is definitely a challenge, but I feel like we're finally getting into a nice routine and life feels "normal" again.


Beckett is Mr. Serious most of the time.  However, he loves to laugh and play, especially with mom, dad, and Caysen.  He is very anxious about anyone besides parents and grandparents strangers!  He makes sure not to venture too far when we are away from home.  He says "dad", but not in the right context.  In fact, he says "dad" for pretty much everything. ;)  He is walking all over and has been since before his first birthday!  I think watching his older brother motivated him to figure it out.  He loves to play outside, but hates wind!  He tried dirt today...didn't like it.  I hold him for the better part of every day which I mostly love, except when we have no clothes to wear because I haven't done laundry in several days. ;)  Beckett is our picky eater.  He likes bananas, beans, peanut butter, a few fruits, and anything that is completely unhealthy.  He does not like vegetables or meat.  We're hoping he learns to branch out eventually.  He is a total snuggle-bug!!  He loves to clap, dance, and wave bye-bye!  The boys are really close in size, but for now, Caysen is still the bigger "big brother".  Beckett weighs about 20 lbs. which means he's a little on the small side according to American growth charts.  We think he's just right!  This boy can be a handful, but we sure do love him! 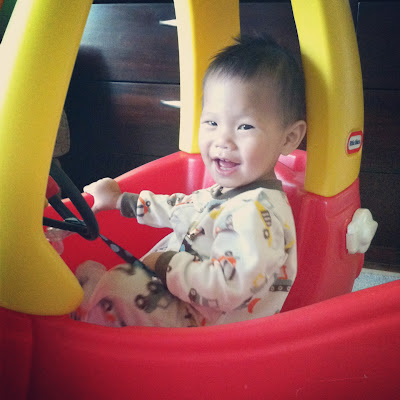 Caysen gets more and more fun every day.  Like Beckett, he is walking all over the place.  Needless to say, they keep me busy!  Caysen uses 1-2 word sentences, but somehow he still manages to talk my ear off...every day.  He talks about mom and dad and cars and trucks and dogs and cats and all kinds of other subjects.  His favorite color was blue for a while, then orange, and now it's white.  He says his ABCs, just not in any particular order. ;)  When we count together, he knows "1, 2" and then he waits and chimes in again when we get to "8,9".  His favorite song is "The Wheels on the Bus".  Whenever I play it for him, he does his weasel laugh and starts spinning in circles (going round and round) and bouncing up and down.  I think we can finally say any feeding issues are a thing of the past.  He's still tiny, a little over 20 lbs. at 3 1/2, but he eats well...and keeps it down!  He knows the way to my parent's house and throws a fit if we don't turn toward their house whenever we pass their street.  He also does a chant every time we are on our way to their house, "Mi-Mi, Pa-ah, Mi-Mi, Pa-ah."  He has been known to ask to go to bed and he always sleeps through the night.  We've been blessed with two good sleepers.  For Caysen, it's the little things that bring a huge smile to his face.  He is so full of joy and spreads it around to everyone he meets! 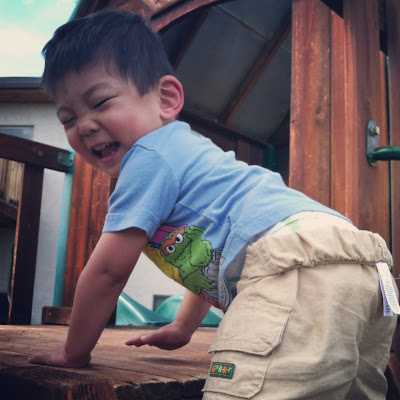 Posted by Leslie Kirk at 6:00 AM No comments: